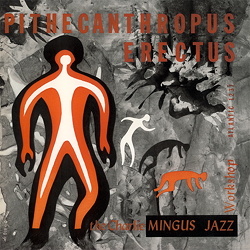 ﻿It was a fairly ordinary quintet that entered the Audio-Video Studios in New York City on 30 January 1956: one tenor saxophone, one alto saxophone, a pianist, a drummer and ... you guessed: an extraordinary man on the double bass! Not just an instrumentalist, but also an imaginative composer, wayfarer between all kinds of jazz, arranger and enfant terrible.
The Suite "Pithecanthropus Erectus" is – among other things – programme music. Having learned to walk upright, having achieved alleged superiority over animals, and having caused devastation, the destruction of mankind’s natural resources follows. The composer Mingus gives his fellow mankind/musicians the widest possible freedom, which all exploit to the full both in interplay and in the solos. Bedded down in noise and sound collages, the piece is the result of an experimental workshop. The Gershwin classic "A Foggy Day" takes on the role of intermediary between the jazz styles of the 1930s and free jazz. And in "Profile Of Jackie" and "Love Chant" the arranger calls for his soloists to go to the very limits of their artistic improvisation.
Charles Mingus was certainly not an easy person to deal with for his family, friends and fellow musicians. But that fades into the background when it comes to such outstanding music. Luckily, we outsiders can once again enjoy the music of this genius 60 years after the studio recording, in its original format.