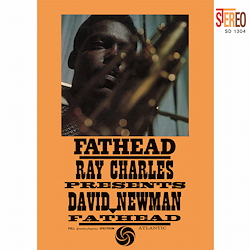 ﻿It is easy to believe that both jazz and rhythm ’n’ blues fans waited longingly for this Atlantic LP. For Ray Charles, later called the ‘King of Soul’, the Ertegun brothers, highly acclaimed producers in the early days of LPs in these particular genres, were the catalysts for his creativity. In Charles’s band at the time of his first live recording, in Newport in 1958, the head of the red-hot wind group was a certain David ‘Fathead’ Newman. The eight numbers on the LP with its early, green stereo label all came from the repertoire of the Ray Charles Band, whereby they are enhanced here through long improvisations without vocals and gain in piquancy and a real jazz feeling. Luckily there was no commercial pressure on Ray Charles so that he could concentrate completely on his piano playing and perform outstanding solos. But the blues were not neglected either: ‘Fathead’ plays in the minor key. And one can only agree with the author of the liner notes when he picks out "Hard Times" as being the absolute highlight on the LP. But it must be added that the other numbers are no less good. And that’s why the purchase of this re-release of an early Atlantic recording is highly recommended.