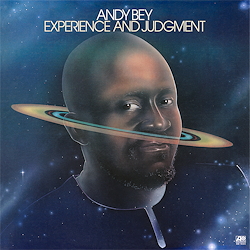 ﻿Andy Bey was one of the most sought-after vocalists in the era of jazz fusion. Between 1968 and 1973 he was first choice as a studio singer for Max Roach, Duke Pearson, Horace Silver, Gary Bartz and Stanley Clarke, to mention but a few. His warm and engaging baritone voice easily crossed the bridge from conventional blues and gospel to a pugnacious, politicising style of soul – Andy Bey was 'spiritual' in every sense of the word. "Experience And Judgment", his debut album under his own name, was recorded in New York in 1973 and quickly became a cult album. Bey delivers twelve songs in single length, which are full of relaxed, funky grooves, soulful and electrifying, and quite lacking in gimmickry – in many of them a blues number is lurking in the background as a basic idea. His most important colleagues are Wilbur Bascomb, who lets his electric slap bass really thump out, and Bill Fischer who joins in on an electric piano, synthesizer and various other keyboards and really sets off a little fusion firework display. The most powerful numbers come from Andy Bey himself, such as "Experience", "Judgment", "Celestial Blues", "Tune Up" and "Being Uptight" – often powering forwards with a vengeance. Bill Fischer – at that time Artistic Director at Atlantic Records – added a few soul ballads to balance out the LP. This album inspired numerous jazz singers, including Gregory Porter. Jamie Cullum says: »What I love about Andy Bey is that he creates an atmosphere. As soon as he opens his mouth, you’re transported to another place.«