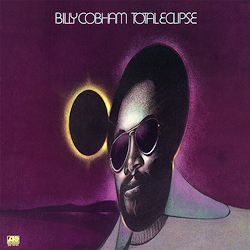 ﻿Ever since his time with John McLaughlin’s Mahavishnu Orchestra (1971–1973), the drummer Billy Cobham is one of electric fusion jazz’s greatest heroes. "Total Eclipse" was the third album he made as a leader within just a few months, and here again he composed all the numbers himself. In the opening 'suite' entitled "Solarization" (eleven minutes long) he already shows his broad and certainly refined stylistic spectrum. Cobham’s music leaps from high-energy jazz-rock with wild guitar and thundering volleys on the drums to highly original improvisations on the piano and winds. Smooth electric Latin grooves and gripping funky numbers are not missing either. Cobham’s handpicked band is bursting with virtuosos. A look at the names of the three-man wind section proves the point: Michael Brecker, Randy Brecker, Glenn Ferris are highlights in themselves. And the then 30-year-old band leader himself was the non plus ultra when it came to jazz-rock drumming technique – his amazingly rapid drum volleys are just as sensational today as they were then. With this album this exceptional drummer will thrill all fans of first-class fusion sound similar to Weather Report or Return To Forever.