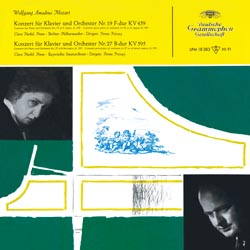 Wolfgang Amadeus Mozart: Concertos for Piano and Orchestra No. 19 F major, K. 459 and No. 27 B flat major, K. 595 - Clara Haskil and the Bayerisches Staatsorchester conducted by Ferenc Fricsay

﻿In spite of the varying degrees of popularity of Mozart’s numerous piano concertos, no one would seriously consider ranking them by quality. It would certainly prove an impossible task, for each and every one of these intense yet often playful compositions could be considered the most perfect of its genre. In view of this, one should concentrate on each work’s highly individual character and this can hardly be more contrasting than in the present two pieces. Thanks to the joyous, energetic disposition of No. 19 in F major, K. 259, it appears to be filled with the exuberant spirit of Mozart’s Viennese period – a time when he amazed audiences with his dexterity at the keyboard. As a contrast, the mood of the late No. 27 in B flat major, K. 595, which was performed in a small circle, is introvert and mellow. The old adage that Mozart’s final concerto was a gesture of farewell and filled with a premonition of death is certainly not substantiated by Haskil and Fricsay’s performance. Through the subtle and flowing clarity of her piano part under the tense and elastic opposition of the orchestra, the soloist banishes the question of the end of time into the background and so pays hommage to the relaxed and self-assured mastery of the Salzburg composer.