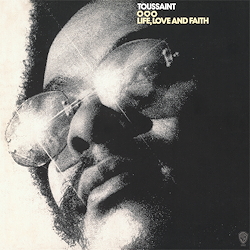 ﻿Allen Toussaint had it all around him – the voices and spirits of black music, rhythm ’n’ blues, funk and soul. He was born in New Orleans and grew up there, the birthplace of jazz. As from 1960, he worked as a record producer and an A&R man at Minit Records, an independent label, which was closely associated with the transformation of the New Orleans Sound. His compositions for fellow musicians landed them in the charts, he frequently participated by performing with them on the piano, and so became a connoisseur and master of all possible sounds.
"Life, Love And Faith" marks his launch into his solo career, and quite rightly so. In the songs, Toussaint amalgamates all he had mastered with a rocking R&B, funky rhythms and expressive soul to create his highly personal sound.
Although it is a soul album through and through, one has the feeling that one is listening to an album from Reprise’s stable of singers/songwriters – including such artists as Randy Newman, Bonnie Raitt, Little Feat and Joni Mitchell – rather than what usually came out of New Orleans in the early Seventies. And also because "Life, Love And Faith" captures an eccentric genius who pursues his own idiosyncratic vision. It is a structured, multi-layered album, which does not show Toussaint in his purest form, but it is his only album that shows just how widely ranged and profound his many talents were.