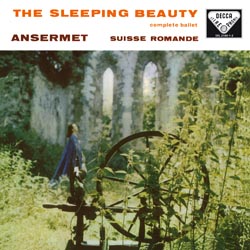 ﻿»His symphonies are ballets, his ballets are symphonies«; such has often been said about Tchaikovsky’s lengthy dance compositions. This opinion is not entirely due to the fact that these works had to please the audience without being danced to after Diaghilev’s legendary ballet company was dissolved. Rather more, Tchaikovsky’s instrumental and incidental music is pervaded by movement and dance rhythms that act as a musical scaffolding.
Almost as legendary as the incomparable heritage of Russian music is the reputation of the Orchestre de la Suisse Romande, whose recordings are famed for their lush and saturated sound colouring. Ansermet transforms the score into a veritable firework of sound, without ever straining after cheap effects by means of a thunderous sound; the strings are clean and warm in all registers, the brass volleys blare out keenly, and the percussion is dauntlessly resolute. This performance and Decca’s customary excellent sound recording render great homage to this music. All the more reason to be glad that this particular "Sleeping Beauty" has been awakened at long last.