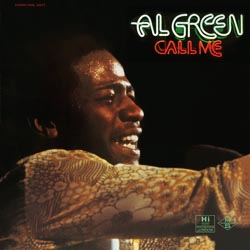 ﻿What connects celebrity chefs and pop stars is their fine nose for ingredients, especially when hot and spicy ones are mixed with milder elements to create an aromatic result. A combination of 'sweet' and 'funky' is the secret of Al Green’s gloriously sentimental and sensual pop songs, which in the sexually free Seventies were often referred to as »songs to make love by«. What swings along gently is, however, Al Green’s subtly controlled falsetto, which he can tone right to the threshold of audibility. But watch out! This music belts out some fiery sounds right from the very first number. The sinuous, swinging request in the brilliant hit single "Call Me", the relaxed and groovy "Stand Up", with its sharp wind interjections which demand one’s unerring attention, are typical for Green’s style, just as is his almost disturbing capability to gain comfort from loneliness ("I’m So Lonesome, I Could Cry"). This rhythmically powered music can best be described as light, intensive, dynamic but never flashy ("Your Love Is Like The Morning Sun"). It finds its earthly culmination in soul ("I’m Waiting") and spiritual depth.