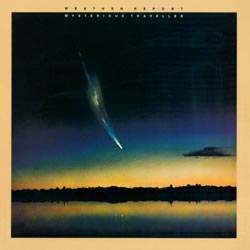 ﻿In Weather Report’s fourth album the mysterious multi-instrumentalist Joe Zawinul travels once again through his virtually endless sound universe. And once again the question arises as to whether he will manage to leave his genetic fingerprint – without resorting to routine – on all the newly created sounds. The magic word here is naturalness, which makes its way safely and surely through the electronic backdrop.
"Nubian Sundance", performed with two drummers and a percussionist, twists and turns in an apparently disoriented, meditative fashion through a mix of sizzling sound and colours, leading up to the final live applause that brings this dance to a close and making it a real experience for all. Following the translucent, will-o’-the-wisp-like "American Tango" is "Cucumber Slumber" with its compact funky sound created by a cool mix of saxophone and the sucking sound of a synthesizer. The two protagonists Zawinul and Shorter seem to be on a par with one another in the dazzling title piece where the lyrical saxophone part is supported by thunderous piano chords. Warm, dreamy harmonies are heard for a short while, only to be hacked apart in "Blackthorn Rose" – this is no orbital music floating around in your head but sheer tension, which makes you clutch your seat until landing. Back on earth the mysterious traveller was received with open arms with the readers of Down Beat magazine voting the LP 'Album of the Year 1974'.