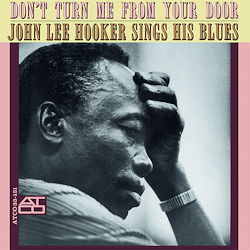 John Lee Hooker: Don't Turn Me From Your Door

﻿John Lee Hooker is not only a mystery but also an interesting man to study. Some, like the author Jacques Demêtre called the musician from Mississippi »the most raw and African of all blues players from a musical point of view«, while the critic Net Hentoff was awestruck by Hooker’s unfiltered power of expression that could scare the pants off a listener taken unawares. The numbers on this LP bear witness to the fact that Hooker’s musical language could stir one’s emotions deeply, even without the meaty 'boom boom'. Each title is like a raw diamond, which is intentionally uncut and is to be perceived with directness. With a stutter and a slur in his speech, the singer declaims his song over a twangy guitar, which is driven along by the rhythmic meter. A final farewell is taken sluggishly and sullenly in the forthright text of "You Lost A Good Man", and even a song without words ("Misbelieving Baby") ponders a question in a purely instrumental monologue. Apart from a dash of boogie ("Pouring Down Rain") Hooker avoids all manner of sweet sounds and harmonies. He remains austerely raw, mercilessly honest, occasionally unforgiving and denies all thoughts of any kind regarding going 'back to the roots'. This sound IS the root of it all.