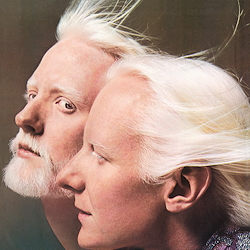 ﻿Facing the audience together and live – the two white blues brothers couldn’t have rocked themselves more authentically and intimately into the hearts of their fans. But their lovey-dovey style still leaves enough room for a wide range of all sorts of rock ’n’ roll. With their accustomed power and originality, the Winters start off with the melodic, minor key "Harlem Shuffle", which is a far cry from a showy, razzle-dazzle performance thanks to its musicality. This is followed by a kneading, hectic groove with shimmering sound colouring ("Soul Man") that gets right under your skin, and then comes the longed-for, ardent duet "You’ve Lost That Lovin’ Feeling", sung from the heart. And precisely because the duo never needed to acquiesce to the mainstream, the Winters serve up tasty musical offerings in-between. The brothers perform with true fervour: hearty, pumping 12-bar blues ("Baby, Watcha Want Me To Do"); short, dry rock rhythms ("Mercy, Mercy"); and a cheeky, free and cheerful rock ’n’ roll "Jailhouse-Tutti-Frutti" medley. Whoever gives such a performance has really pulled it off. The duo virtually embraces the audience and makes them feel a real part of the event – together and live!