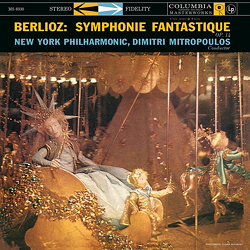 ﻿Beethoven had just finished writing his symphonies when – in 1830 – a young Frenchman created a sensation with his completely novel and exuberant orchestral music. Based on classical music form, Berlioz composed his »massive instrumental composition« as a five-movement musical drama. Such a stroke of genius, in which the ego and grief thereof are described, had never been heard before in the French Romantic period.
Berlioz employs a very large orchestra with a big timpani section, four bassoons and military brass to present the young artist – an autobiographically motivated character – who dreams his way through the various episodes, hallucinating and frenzied. Here it is clear that it is Berlioz’ declared intention to express the artist’s visions radically and unmistakably in music – beginning with the ever-recurring delusional 'idée fixe' via a terrifying opium intoxication and ending up with the nightmare of his own burial.
Of the many high-quality, often highly impassioned performances, this particular one by Dimitri Mitropoulos is certainly a benchmark recording. The great conductor makes the rhythms pulsate; he skilfully mixes the wealth of sound colouring, and blends the orchestral instruments so subtly that one notices previously unheard details with every listening.