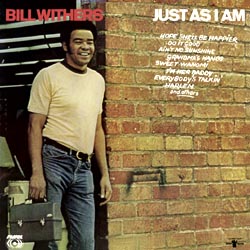 Bill Withers: Just As I Am

"Just As I Am" – anyone who sets off on a late career can already have earned himself quite a reputation, although in the case of Bill Withers it had had nothing to do with music at this stage. Withers served for many years with the US Navy, had a job as a milkman, and installed toilets in jets for American aeroplane construction companies; all the while he bombarded record companies with self-produced demo tapes which landed in the dustbin. In 1971 came his breakthrough when the successful producer Booker T. Jones hauled him on board and sent him into the recording studio with guitarist Stephen Stills, drummer Al Jackson and bass player Donald 'Duck' Dunn.
In his debut album Withers demonstrates his universal, mature competence as a singer, composer and performer, which was hardly surpassed in his later recordings. "Harlem", an unadorned milieu-funk number about the New York slums, "Grandma’s Hands", with its obligatory retrospect of his childhood, and the sentimental ballad "Ain’t No Sunshine" with its prayer-wheel-like »I know, I know ...«, repeated over and over again on the offbeat, are the musical credo of a experienced artist in his mid-thirties who at last is given a hearing. There’s simply no alternative to this recording by the great songwriter with the small repertoire.