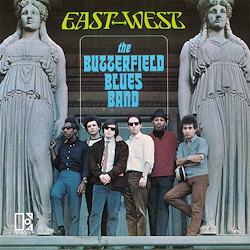 ﻿In 1965, just one year after Paul Butterfield had formed his blues band – named after himself - and launched one of the very best groups among the white Chicago blues community, the band produced this dynamic and visionary album. The group presents a wide range of contrasting numbers, both eastern and western, which reflect the LP’s title – something totally new and innovative. In the first few titles, traditional standard numbers come over rather enigmatically while supporting original and rhythmic compactness, but this soon gives over to a tactically well-formed instrumentation and lengthy solo interludes. The all-embracing motto 'blues' is taken up by the band in Nat Adderley’s "Work Song" at the very latest, with mind-expanding ways of playing and varying sounds. Catapulted by Mike Bloomfield’s artistry on the guitar into the world of rock, all the musicians celebrate these well-known jazz standards and each man contributes his personal skill into forging a perfectly balanced team effort.
The title number "East-West" ultimately demolishes the world of the blues. In the tonal mixture of confidently prepared rock ingredients and borrowings from Indian music (raga rock), we have an amalgamation of rock, blues, jazz and oriental melodies which result in an emotional, unheard-of sound that is well worth the hearing.