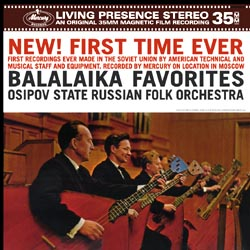 The balalaika is not a difficult instrument to describe: it has a triangular body, three strings and a fretted neck. It is far more difficult to describe the inherent values of this national instrument, of which there is a whole family with sizes ranging from the piccolo and alto to the bass and double bass. Accordingly a wide variety of timbral colouring can be achieved, which – together with a broad repertoire – is exploited to the full by a traditional ensemble such as the Osipov Orchestra.
With their performances of arrangements of well-known, romantic Russian pieces, popular adaptations and waltzes, this professional orchestra gives us an insight into the spirited and highly entertaining world of a living musical culture. No different from a classical orchestra, the arrangements are rich in soloistic interludes. Alongside the domra, an instrument with three or four strings, we hear a xylophone, ancient wind instruments and the sonorous, rippling bajan (button accordion). This recording goes back to the roots of Russian music and rightly occupies an important position in our Russian Edition.