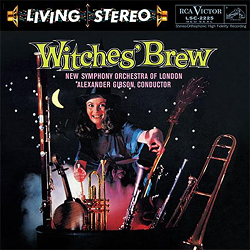 This famous Alexander Gibson/New Symphony Orchestra of London collection from 1958 debuted at the dawn of the RCA Living Stereo era. It became one of the most sought-after Living Stereos with music by Arnold, Liszt and Mussorgsky amongst others, all with a spooky, witchy theme. The performances remain today as characterful and incisive as they were then.
We've taken this classic and given it the full Analogue Productions reissue treatment, featuring a remaster by Germany's Willem Makkee from the original analog tapes, and plating and 200-gram pressing by Quality Record Pressings. Toping it off is a thick cardboard Stoughton Printing tip-on jacket.
If such music didn't cast the right sort of spell, so many listeners wouldn't be returning to it on so many occasions, somehow feeling constantly refreshed.