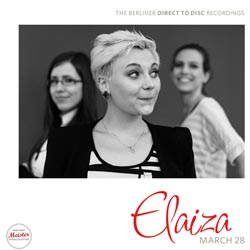 Elaiza is a young female trio which was formed around singer and songwriter Ela Steinmetz, and whose sound is given a special character thanks to her Ukrainian-German background. Having recently won the Young Talent Award at the Women Of The World Festival, Elaiza subsequently won over audiences at sold-out live shows, and then released the direct-to-disc production March 28.
Elaiza combines the ancient traditions of east-European folk music with modern pop melodies to create unique catchy songs. The trio themselves label their unusual roots-pop crossover mixture as neo-folklore. That Elaiza sounds authentic and sophisticated without resorting to modern digital recording techniques is demonstrated admirably by this direct-to-disc recording. In this completely analogue production, the musicians record their songs purely and simply, without being able to lean back on cutting, editing or revamping. The result, entitled March 28, (so named after the recording dated) gives one an impressive taste of Elaiza live.