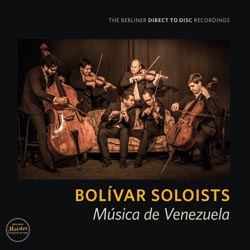 In Venezuela, at any gathering, musicians will take out their instruments and play traditional music for hours. This is a wonderful tradition, deeply missed when Venezuelan musicians go to live abroad. One of the triggers for the creation of Bolivar Soloists was the need to play our music, share it with our colleagues and perform it for audiences around the world. The original tunes have very distinctive characters and evoke simple but powerful emotions. It was a true challenge to bring these tunes into to a classical format trying both to keep the essence of the original and create a classical work to give it a faithful frame. These pieces convey the spirit of Venezuelan music making but also appeal to classical audiences who will enjoy the fine playing and fantastic musicianship.
After their debut record with music from Astor Piazzolla for Berliner Meister Schallplatten, the Bolivar Soloists make their second LP with a new formation: flute, oboe, clarinet and string quintet. Powerful and flexible, this ensemble is joined by the Cuatro - Venezuelan national instrument, a four-stringed guitar - which plays a very important role in this repertoire. The players, who come from South America and Europe, became very intimate with the music, allowing them to perform it with great rhythmical accuracy but with freedom and spontaneity. As this performance was recorded direct to disc, leaving no possibility of post-production, audience were invited to the studio to create the right atmosphere and make the musicians feel at home.