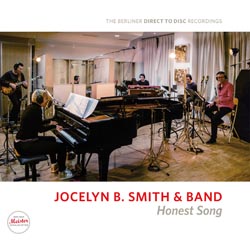 The celebrated Diva Jocelyn B. Smith has been lauded by the Frankfurter Allgemeine Zeitung for her outstanding productions in the fields of jazz, soul, blues, pop, rock, gospel, funk, crossover and classical music, and described her as a »total work of art« – and now she surprises us yet again with a completely new genre.
Born in New York in 1960, she moved to Berlin in 1984 where the music scene has become unthinkable without her. This is not only due to her powerful voice and her numerous cross-genre productions and collaborations – ranging from productions with Falco to composers such as Heiner Goebbels and Mikis Theodorakis – but also due to her social engagement.
The present direct-to-disc production was made following the recording of her CD "Here I Am" and contains seven songs, which were performed live in the studio before an enthusiastic audience and captured directly onto disc.
This vinyl album takes Jocelyn B. Smith back to her childhood roots and the piano. She transports the sound right back to its original form and uses this as a basis for her art. She then weaves in further strands, whereby she delves into her musical experience and allows both her own compositions and those of old masters (J. S. Bach, Sergej Rachmaninov, Ludwig van Beethoven) to come to life.
In "Honest Song" she allows us a peek under her veil, the often-misunderstood 'Diva' veil. We accompany her in her moments of fear, hopelessness and self-contemplation.