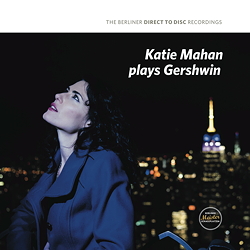 "Katie Mahan Plays Gershwin" Rhapsody In Blue, "Embraceable You", "I Got Rhythm", "Our Love Is Here To Stay", Preludes Nos. 1-3

George Gershwin is America's most beloved classical composer. His music personifies the ideals of a vastly diverse modern world, like a magic mirror which reflects every aspect of its surroundings. Gershwin is responsible for opening up the concert hall to the popular American composer, and for breaking down the conventional boundaries between popular music and art music.
He loved to play the piano, and would sit at the piano and improvise songs for hours. His piano playing was outstanding, characterized not only by its unbridled virtuosity and spontaneity, but also by its intricacy, charm, and sheer inventiveness.
It is through the piano that his imagination came to life in composition, and although he was equally at home improvising on the piano at a party, composing popular songs for Broadway, or writing large works for the concert hall, it is as a 'serious' classical composer and pianist that Gershwin most desired to be remembered and respected. The selections on this album pay tribute to the 'classical' Gershwin.
Katie Mahan who, at the age of four, was inspired to study the piano after attending a concert of Gershwin given by the Labèque sisters, does not try to imitate Gershwin's singular piano style, nor does she seek to play in a jazz style. Rather, she brings her own unique voice to his works, presenting arrangements that are unabashedly classical, and which reflect her own personality and musical background.
In this live direct-to-disc recording, Mahan not only captures the spontaneity and originality inherent to the fiber of Gershwin's music, but also transports the music into the classical realm where the composer most desired to be.