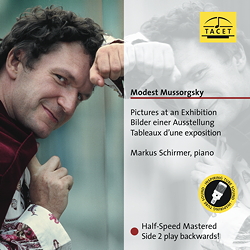 Mussorgsky: Pictures At An Exhibition

It is always a good idea to bring out Ravel and Mussorgsky on a record, especially when one remembers that the Frenchman enhanced Mussorgsky’s colourful piano suite "Pictures At An Exhibition" with his outstanding arrangement for orchestra. The latest production from the Tacet label – purely manual and of course fully analogue – unites two important compositions from the two maestros entitled “Pictures & Reflections”. Here the Austrian master of the keyboard, Markus Schirmer, proves himself to be a real tonal magician, performing with bravura and vivacity on a F-278 grand piano manufactured by the Italian high-end maker Fazioli instead of the more usual Steinway.
Schirmer’s comprehension of the »inexhaustible tonal scope offered by the grand piano« is evident right from the very first bar. In clearly defined sounds, which – bright or dark – roll out or just trickle, then strike out with a metallic steeliness, the interpreter encircles, paints and sculpts these pictorial miniatures in a concert hall, which was fastidiously checked and balanced out to achieve the best possible acoustics. All in all, this recording towers above even a top-notch production: it is an event that has been created by the producers and architects of sound and tones in which the listener can now partake.

Now halfspeed mastered and the B-side is playing backwards!