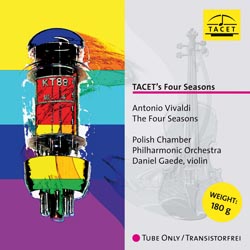 How should Vivaldi’s "Four Seasons" be played? How should it be heard? As an onomatopoeic animal show and weather report? As an emotional Baroque violin concerto? Or simply as a musical »contest between harmony and invention« as the composer himself put it? Countless violinists have attempted to answer these questions with countless new versions and different performance styles of this timeless work. And so we stand, quite at a loss, faced with a myriad of recordings, which range from flamboyant, symphonic readings to ethereal chirruping, and even trendy disco versions.
That the work can be beautifully performed without resorting to venturesome experiments is shown by the PCPO and soloist Daniel Gaede, who focus on authenticity and straightforwardness in their reading, without pledging themselves to a scholastic performance practice as preached by some Baroque gurus. The colourful constant change from good-humoured playing together to 'contesting' with one another is filled with the sheer joy of music-making that is free of mannerisms and whims. These performers demonstrate just how smoothly a four-wheeled Baroque motor can run: it purrs, sings, murmurs, accelerates and slackens without juddering in the least. This recording’s forte is found in the light-hearted simplicity and naturalness of the playing and the finely balanced analogue sound recording.

Recording: Juli 2007 in the church of "Stella Maris" in Sopot, Poland, by Andreas Spreer and Roland Kistner
Production: Andreas Spreer