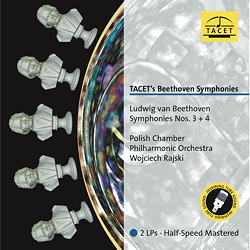 Often cited as a tonal example of his “new path", Beethoven’s Third Symphony allows several possible explanations for its revolutionary character. To describe the work as a tonal picture of heroism, romantic revolution and its initial dedicatee Napoleon Bonaparte is quite legitimate, considering its Marche funèbre, which is often played in France to commemorate the dead. No less exciting from a compositional aspect is the new way in which the thematic material is used, whereby it is gradually massed together, magnifying its unbounded energy until the regular beat completely disintegrates. An orchestral dialogue breaks out in a fast tempo, rather like a sinewy, light athletics competition - there is a tightness, a broadening and concentration of orchestral resplendency and musical material.
Composed in the time between the Third and the weighty Fifth, the Fourth Symphony, with its classical form, is like a haven of tranquility between the contrasting emotions of her two disparate sister works. Drawn along by the romantic expressiveness of the weightless opening which feels its way towards safety as it were, the music of the first movement soars upwards to sanguine elation. In true tradition of the genre, the second movement is simply entitled Adagio. Here the rich and melodic music is reduced down to a diminished ensemble with chamber-music-like transparency. Full of good humour and buoyancy, the effervescent Finale storms ahead via short contemplative passages and surges upwards to new heights of orchestral fury. Wojciech Raisky, who always demands a highly cultivated sound and finely balanced phrasing from his orchestra, delves into the depths of the score to create a cheerful, contemplative yet very impressive interpretation, which reveals - even after several listenings - a wealth of previously unheard details.
Halfspeed mastered!