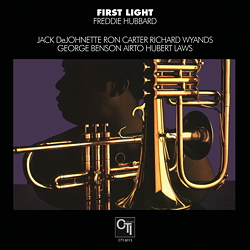 Freddie Hubbard was one of the most prolific jazz trumpeters in the business. He played a hot and sassy horn! When he was teamed up with George Benson, Jack DeJohnette and Ron Carter (just to name a few) on this one of many Creed Taylor-produced collaborations, he most deservedly won the Grammy!
The opening title song "First Light" has an ethereal beginning with a diverse arrangement. An unusual arrangement of Paul McCartney's "Uncle Albert/Admiral Halsey" is most satisfying. Henry Mancini's "Moment To Moment" has a hauntingly sweet sound. "Lonely Town" is darkly complex.
There are many sides and moods to each of the songs within this original work. With stylish jazzy rhythms and rich orchestrations, this is THE Freddie Hubbard album to have!